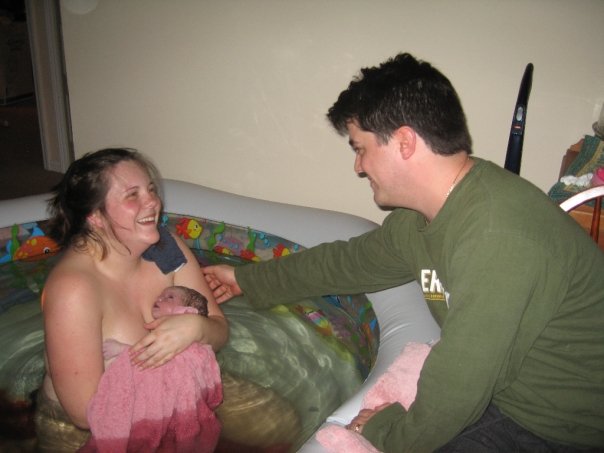 This week we have something unique– a home birth story from a father’s perspective!  Thanks to Cody and Erin for sharing the birth story of Bella, born at home in Louisville. 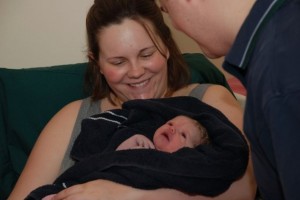 12 inches of snow fell March 13th and 14th.  Erin began having contractions, and with the roads completely covered and beyond traveling condition we felt certain that it was the beginning of something real.  Well…maybe it was.

But, for the subsequent ten days Erin and I watched as contractions and cramping would begin around 6:00 pm, get nearly regular and fade away.  We got to the point that we would have to keep ourselves quite unexcited lest our dreams of Bella coming soon would be dashed by the clock’s strike of 9.  So Erin would eat her chocolate ice cream with strawberry preserves and I would rub her feet.  Night after night, sleep getting harder, they’d pass as they always had.

Tuesday the 25th we woke up…7:45am.  Erin rolled over and said she had been having contractions and they were “different” than they had been.  Unimpressed, and having mastered being unexcited, I asked her to time them while I took a shower and got ready for work.

Out of the shower and ready for work…8:15.  With excitement, well-tamed Erin sat up, “They’re seven minutes apart.”  We debated whether I should go to work or whether this was the real thing. Still unimpressed by their regularity, I left for work.  Only to call her every half hour, “How are they?  Are they longer, stronger, and closer together?” (I had listened in my Bradley Class).  Sure enough they stayed.I went home at 2:00 to give her a nap and did a little spot cleaning just in case the midwife might be dropping by.

They regularized at about 5 minutes apart when we called Erin’s parents who had been watching Emmy so Erin and I could concentrate on what she was feeling.  I said, “If you all want to bring Emmy on over, we’ll put her to bed.  And if you want…we’ll play Uno.”  And play Uno we did!  Of course, every five minutes or so we’d pause for a moment of silence.  No one won, but the game was competitive.

11:00pm rolled around, our company left, and Erin and I settled in for the night that never happened.  Her contractions began to space out again, and her untamed excitement had gotten the better of her.  “Why are they spacing out?” she said to me half asleep, “they have been regular all day.”  And as I began my sleep-intoxicated comfort blurb she gave a yelp.

“That one was really bad,” she said after it passed.

“Why are they so bad all the sudden?!”

“Have you called Susan and Midwife?”

And so I did.  It was about 2:00 in the morning when I called our Doula, Susan, who was as chipper as a chipmunk…woken up in the middle of sleep.  But, I told her what I knew i.e. that they were 3 minutes apart and lasting one minute and that Erin really needed her to come by.  After one hour of these regular and fierce contractions soaked up by our trusty birth-ball, I called Midwife.  Things were in full swing.  She wanted to talk to Erin, and while Erin had a bit of a difficult time talking, what with the crazy contractions and all, Midwife was able to gather that she should get on her way

Susan showed up about the time I called Midwife, and Midwife showed up about an hour after I made the phone call.  At this point Erin couldn’t get a word out, she didn’t want to talk, and she did…did not…did…did not want me to touch her. As these progressed, and we filled the birth tub with the warm water of our kitchen faucet via a fish tank cleaner, the doula assistant and the midwife’s assistant showed up in due course.  The more people showed up, the more Erin snapped out of it, and snapped into her role as Donna Reed.  If it had not been for those contractions she probably would have thrown a dinner party for everyone.  She offered food, apologized about the microwave having not been wiped down yet that week, and even discussed how everyone was doing so very early in the morning.  The con…tract…ions spaced out as you could imagine…or further than you might imagine.

At about six o’clock in the morning, our midwife vocalized exactly what I was thinking, “Let’s let everyone go home.”  It was obvious things were slowing due to Erin’s preoccupation with every one else’s comfort.  I wasn’t going to say it, but no need, Midwife did.  I sat down with them as they packed up.  “As soon as you all walk out that door they are going to pick up.  I know her well enough to know that.”  Bags packed, doors closed, Erin’s crying, on come the most fierce contractions yet.  She nearly threw up.  She was progressing.

This was the only part of the labor that surprised me looking back on it.  She screamed, she tightened, she did everything that every books told her not to do, but she was disappointed that she had stalled and embarrassed she woke everyone from their night.  It was understandable.  All those hours, all that work, only to have everyone bail — she felt.

She arrived as I remember it, at about two o’ clock in the afternoon.  In all her doula-ity she knew just what Erin needed: birth ball time, honey straws, and support, and that’s just what we did.  As Erin ate the honey straws she began to come back around, she began to talk to Susan more, and then she got a bit chatty again.  The con…tract…ions.

“You are tired, you need to rest,” said Susan firmly, “but you cannot go around these contractions.  The only way you are going to do this is go right through them.”  Erin shortly thereafter fell asleep.  Every five minutes, she awoke, got to her knees in the tub, moaned, rocked, eased, sat, and fell asleep again.  It was much needed.  It was what Susan told her to do.

Erin went three hours in this routine, and at about five o’clock something happened.  We actually still don’t know what, but she said, “I think my water might of broke.”  Maybe, we’re not really sure, but it was about this time that we called Midwife  and the point of no return was certainly passed.

By the time Midwife showed up Erin was getting pretty comfortable with her routine which she had been doing for some four hours.  Feeling pretty good.  Said our midwife, “You’re going to need to get out of that tub.”

The water was slowing the contractions, and against her will Erin made her way to the bed.  She HATED the bed.  Her contractions would almost immediately pick up and the pain was excruciating in that position.  We tried the ball. Nothing.  We tried the toilet.  Something, but not enough.  Eventually we pulled the gliding chair in from the living room and there she plopped, and eased into transition.

Silence.  That’s how I remember it, oh except for the snoring.  A contraction would come on and with it came the heat of pain and she wanted her blanket off, it would pass and the blanket was gently draped on again.  She said nothing, I lightly touched her.  She eased in and snored away.  Contraction, remove blanket, rub…ease, reapply blanket, snooorrrrre.  It was so cute, it was so wonderful, and it was simply one of the most beautiful things I have ever seen.  My wife was doing what God created her to do.  Pain meant nothing, heat, cold, all of it, just a part.  She was comfortable.  Well, you know, every three minutes or so.

Finally she let out quite a moan.  She had been moaning for some time, but this was noticeably lower than the previous.  Our midwife peered in from the hallway (she wouldn’t come in because every time she did Erin ’s contractions slowed)

“When did she change to that position?” she whispered to Susan.

“We need to move her, she has a cervical lip.”

Okay, now there is some prophetic gift or something these birth junkies have access to, because Midwife had never, I mean never, done an internal exam on Erin.  She had checked heart tones frequently throughout, but had never examined Erin internally.  But, she knew.  Somehow she knew.  We helped Erin up in relative silence and brought her to the toilet where she sat facing the lid and tank.

All of a sudden, a change: “Cody, when am I going to go through transition?  ”She hadn’t talked in a good hour or more.

I smiled, “Don’t worry about that Babe, just go through this one.  Just like the others.”

“I don’t remember the others.”

“I still have to got through transition, though.”

“Honey, you’re in it,” says Susan from the bedroom.

It was so funny, but the part of labor she feared the most was upon her and she became as sweet as she could be.  Susan asked if she wanted something to eat, maybe an apple with peanut putter or something.  Erin replied, “Oh that sounds good… but that’s going to be a lot of trouble.  Don’t worry about that.”

“Erin if you want to get in the water, now would be a good time, you’re getting ready to push.”

“I don’t want to get in the pool; it will slow down my contractions.”

And we helped her waddle her way down the hall, lift her legs to get in the tub, and on all fours she went and the contractions did their work.  No one said a word.  The only voice was the occasional note taking of  our midwife’s assistant and the whispers, “get her a cold rag,” “let’s warm this water up; it’s too cold for the baby,” “wooooooooo—eeeeeee—-ooooooo,” (that was the doppler that had gotten wet and had become conversant in whale).

The contractions would come.  Erin did great.  Another.  Another great one.  Then, “Bella, come out!” Momma said and her pushing became more intense.  Momma was working with the contractions pushing, pushing, pushing.  The pain was gone.  Push.  Push.  Push.  No sound, just silence, occasional whispers and candle light flickering.  No one would dare say, “Push,” no need for that.

“Tell me what to do.” Pleaded Momma. 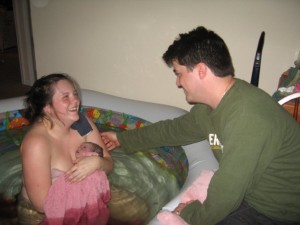 Push, the head… the pain came back.  Push.  Water broke.  Almost. Push fonte dell’articolo!  And out came Bella, the most beautiful smile Erin had ever shone (and I mean that it shone), and “I did it!  We did it!”  Bella sucked her little hand, Daddy patted Momma’s arm, and said, “you hold her; you didn’t get to hold Emmy.”

The rest is just “after Bella” moments.  Third stage labor, nothing to speak of. The placenta sitting in a chuck’s pad in our bed for the following hour or so, unforgettable.  It was amazing.  It was over and it was totally amazing.