The Home Birth of Silas 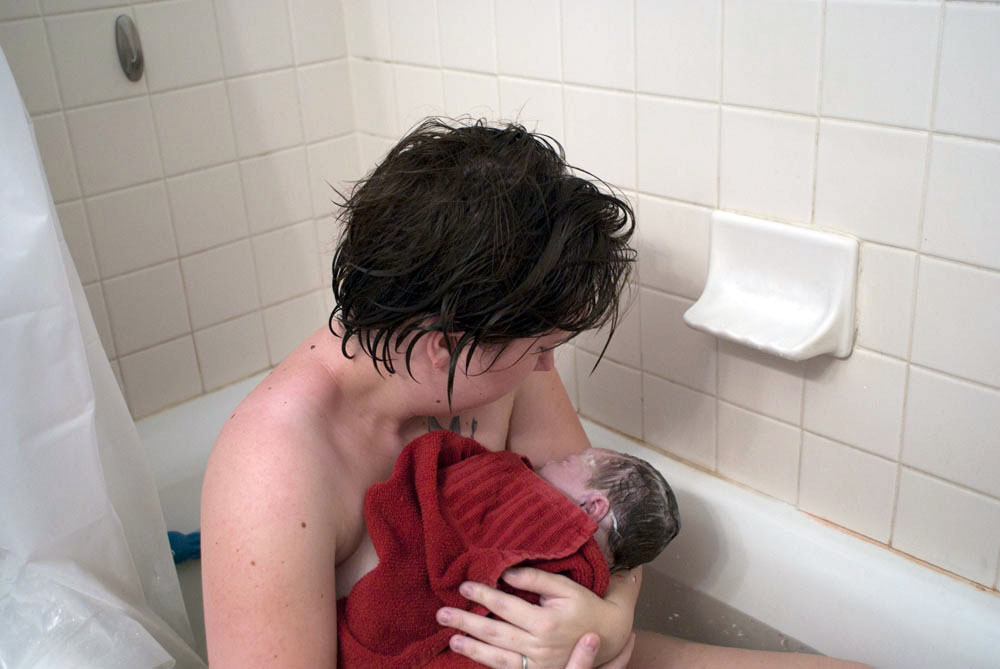 Thanks to Sam for sharing the Kentucky home birth story of Silas.

I had a normal pregnancy. No issues at all. Except, from 37 weeks on, I had prodromal labor. Every night I would have timeable contractions that were slightly painful, but they never seemed to amount to anything. I was getting very antsy and uncomfortable and just ready to meet my baby! I had my daughter 10 days early (medical induction in the hospital), so when I passed that point in this pregnancy I was feeling done. I started Evening Primrose Oil at 37 weeks, I bounced on my birth ball as much as I could, I walked, nested, had sex… pretty much everything would cause contractions but they would always go away. I was feeling pretty discouraged! I never had my midwife check me for dilation at all because I didn’t want to feel worse if nothing was changing.

The night of December 23rd I was 39 weeks and 3 days pregnant. We had planned on taking our daughter, Violet, to see the Lights Under Louisville. She was pretty grumpy though so I said we could just go tomorrow night, Christmas Eve. Jeff (my husband) said no, we should go tonight because it was sure to be busy on Christmas Eve. So off we went.  It was busy anyway and we waited in line for nearly 2 hours. I noticed that I was having occasional contractions, but they didn’t hurt and weren’t strong or close together so I ignored them. Jeff and I joked about how inconvenient it would be to go into labor while we were there since we were in a cave underground.

After we finished going through the cave, I told Jeff we should get Waffle House. I was craving waffles pretty badly! Waffle House was packed for some reason. The three of us jammed into the only booth, meant for 2. My belly was touching the table in front of me!

When we got home I had a slight stomach ache. I thought nothing of it since I am lactose intolerant and had some butter on my waffles. I was still having a few contractions when I lay down, but they were exactly like the other ones I had been having for 2 weeks, except I noticed I had a slight backache with these. I tried timing them just to be sure they were nothing, and they were all over the place so I tried to sleep. I set my phone down and suddenly I was hit with a massive contraction. I rolled myself out of bed onto the ground on all fours. I tried to be quiet since it was so late and Jeff and Violet were asleep in the bed. When that contraction was over I crawled to the bathroom (easier than trying to stand up that late in pregnancy lol) and closed the door. I sat on the toilet for a few minutes and waited to see if I would have another contraction. I did. It hurt so much that I jumped up and was hanging onto the sink jumping from foot to foot. I couldn’t stand still. I quickly ran a bath while swaying back and forth thinking that would calm things down. I was shaking so badly that I had trouble getting the temperature right. I finally got the water warm enough and got in.

Another contraction. Then another. I yelled for Jeff. He didn’t hear. Another contraction. They were coming back to back and they were HARD. I yelled for him again, as loud as I possibly could. I couldn’t possibly get out of the tub and walk to him at that point, so if he didn’t hear me I didn’t know what I was going to do. He finally came in and I told him to call my midwife. When that contraction was over, I told him never mind, I must be imagining things. So he waited. Another contraction. Then I yelled, “NO CALL HER NOW! I THINK I AM DYING!” I also told him to call 911, that something must be seriously wrong. I wanted to go to the hospital. I actually thought I was going to die. But wait. These were transition thoughts! This couldn’t be transition. This couldn’t be happening this fast! I had been having contractions for all of 5 minutes!

Jeff called my midwife and she said to time them for 15 minutes or so and she would start gathering her things. I kept trying to find a comfortable position in the bath tub. We had a blow up birth pool, but getting it ready never even crossed my mind and I didn’t want Jeff to leave anyway. I told Jeff that I would never be able to get through this. It hurt SO much. I was convinced that this was early labor and if that was true, how in the world would I be able to get through transition? I felt like the biggest wimp ever.

After it had been 15 minutes, Jeff called my midwife back and told her my contractions were like this:

So basically, all over the place. She said she was just about done gathering her things and would be on her way. But she lives 2 hours away from us. I had been in labor for 20 minutes so far.

I continued to labor like that for awhile longer. I was still trying to find a good position in the tub. I had been resting on my back most of the time. I tried to flip over to all fours, but I was so shaky that I couldn’t. I couldn’t talk, either, so there was no asking for Jeff to help. The contractions kept coming so fast that I couldn’t think and just lay back down. I had the shower curtain closed and hid in my “cave.” Jeff sat on the toilet next to the tub and I held his hand while he continued to time my contractions.  When one would come on, I would let go of his hand and sort of hit him to let him know that one was starting. Then I would grab his hand again and hold on tight. Afterwards, he told me that he made sure to hold my hand as hard as I was holding his so that I wouldn’t realize how hard I was gripping it. I remember getting sweat in my eyes.

I was loud. I wasn’t moaning, I was yelling through my contractions. I tried to moan, but yelling felt much better. We had the door of the bathroom closed since Violet was across the hall in our bed sleeping. By some miracle, she never woke up.

I started to feel pushy about 20 minutes after Jeff got off the phone with my midwife. It had been 40 minutes since I had my first contraction. I was convinced that I was still in early labor. I tried to keep from pushing because of that thought. I kept imagining that my cervix wasn’t fully dilated and I thought I would tear it.  I held back for 2 contractions. I was flipping all around trying not to push. My head hit my daughters hanging basket of bath toys and they fell out all over me and into the water. Finally I couldn’t hold back anymore. I was pushing with all my might and there was nothing I could do about it. I vaguely recall feeling a pop and I suppose it was my water breaking. I was in the middle of pushing though so I couldn’t really dwell on it. After the next contraction, I reached down and could feel the head right there, about 2 inches in. I told Jeff that and he called my midwife back to let her know. Even though I felt the head, I didn’t believe that it actually WAS the head.

I remember feeling the burning that everyone talks about, but it was more inside than I was expecting. After next contraction, the head was out. I didn’t really realize it until I reached down and felt it. I told Jeff that it was out and he looked in the tub and got this freaked out look on his face and said he should probably call my midwife back. She didn’t answer that time (she was driving). Jeff tried calling her again. Before she could answer, the baby was here. Jeff was on the phone with my midwife watching me as he was born, so no one caught him really! He just shot out and then I said, “Oh my god!” and I scooped him up. He didn’t cry right after he was born. I think he was just as stunned as we were! He was crying after about 20 seconds though and he pinked up really fast.

He nursed pretty quickly after he was born and hasn’t really let go since! I went to move his umbilical cord from between his legs 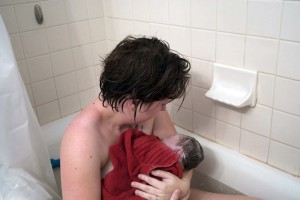 and that’s when I noticed that he was a boy. I cried a little. We didn’t find out his sex and I was really hoping for a boy.

Jeff put my midwife on speaker phone and she was telling me that soon I would start feeling contractions again and I would birth the placenta. I did, but the placenta sort of folded onto itself and got stuck. She told me to try very gently tugging it to see if I could get it to finish coming out, but I couldn’t get it to move. She ended up sending a closer midwife over to help just in case. When that midwife arrived, she just gave my placenta a twist and it slid the rest of the way out. She also went ahead and checked me for tears. I had a 2nd degree tear and a few skid marks as well. We decided against stitches. I told the other midwife that all of Violet’s toys would need a good washing after that. We must have looked silly sitting in a bath tub full of vernix and blood with all these bath toys!

Afterward, she helped me get cleaned up and moved to the bed. We called my birth photographer over to get pictures of everything else (weighing, foot prints, etc) since we didn’t think (or have much time!) to call her while I was in labor. She and my midwife arrived an hour later and everything was hectic from then on. Silas got checked out and he weighed in at 8 pounds 1 ounce and was 20 inches long. So much teensier than I was expecting! But everything was fine and we are doing great! 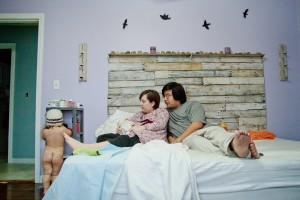 Start to finish, labor was 45 minutes long. It was hard. As soon as labor began, I was having transition strength contractions. I could never get on top of the pain. I thought I had prepared for everything- a long labor, possibility of transferring to hospital, possibility of a c-section, shoulder dystocia, etc… But I never even imagined that I would have a short labor. I never imagined that we would end up free birthing! I don’t think I have wrapped my head around it yet. It just seems like I was pregnant and then I magically had a baby while taking a bath. It seems like labor was a dream.